The real story of what it takes to risk it all and go for broke.

Conventional wisdom says most startups need to be in Silicon Valley, started by young engineers around a sexy new idea, and backed by VC funding. But as Mikkel Svane reveals in Startupland, the story of founding Zendesk was anything but conventional.

Founded in a Copenhagen loft by three thirty-something friends looking to break free from corporate doldrums, Zendesk Inc. is now one of the hottest enterprise software companies, still rapidly growing with customers in 150 countries. But its success was anything but predestined. With revealing stories both funny and frank, Mikkel shares how he and his friends bravely left secure jobs to start something on their own, how he almost went broke several times, how they picked up themselves and their families to travel across the world to California and the unknown, and how the three friends were miraculously still together for Zendesk’s IPO and (still growing) success. 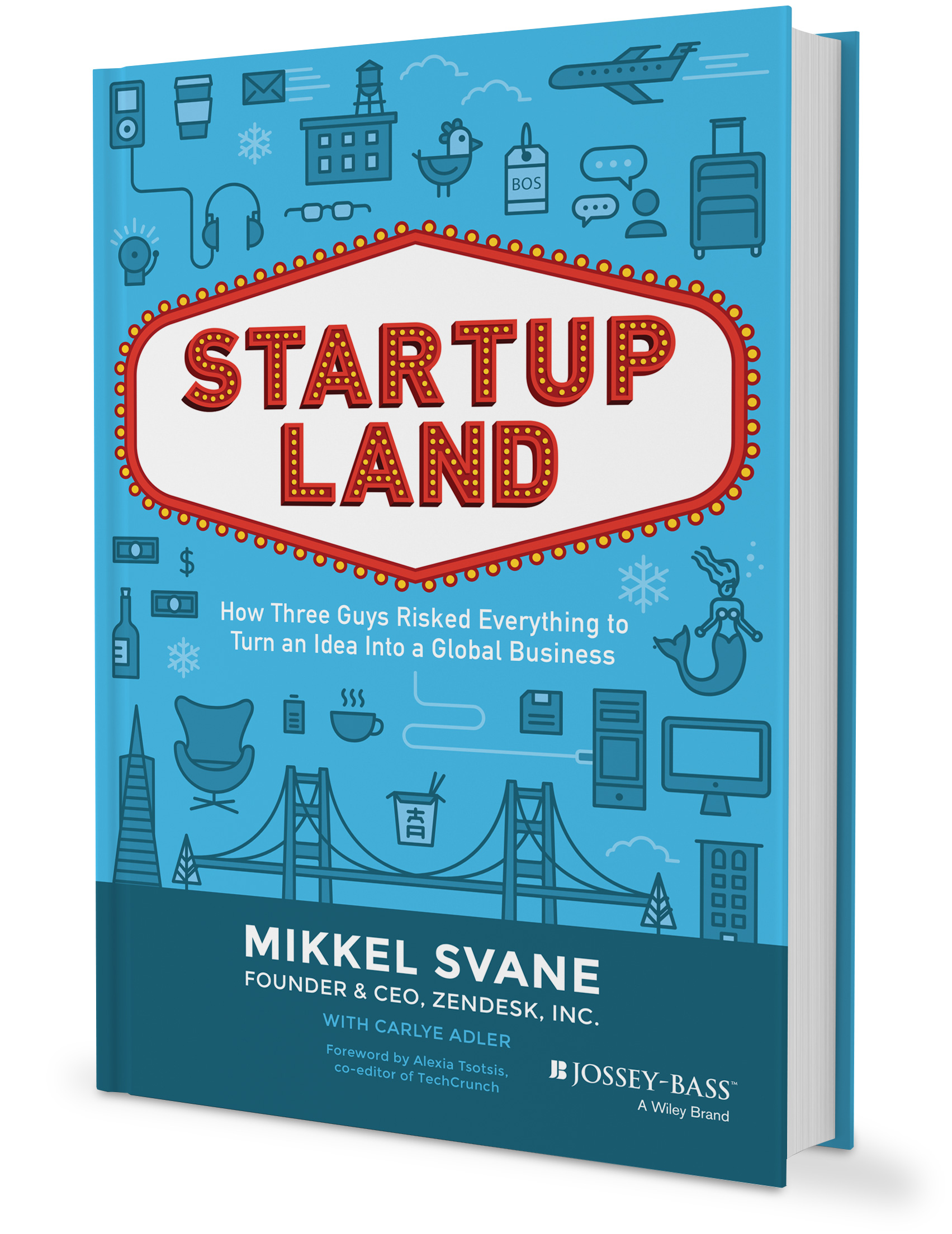 EXCERPT FROM CHAPTER 6: COMING TO AMERICA

Once again, the final negotiations happened at the chicken farm. All of the paperwork was expected to go through before mid-night, but it got delayed and conversations dragged out the whole night.

I didn’t sleep, but it didn’t matter. The next day we drove down to the beach at the western side of the peninsula for a barbeque lunch. The weather was fantastic, we were eating new Danish potatoes directly off the grill, and the kids were running around butt naked playing on the shoreline.

My father-in-law asked me about what happened the night before. I tried to explain the $6 million investment, but I couldn’t make it make sense.

“How much again?” he asked. He was clearly excited about the big number, but also completely perplexed by the nature of the deal.

To him, it was so abstract. The world of the Internet is surreal to someone whose work is so grounded in the practical arts of keeping animals. All of his life he got up at 5 a.m. and went to bed at 11 p.m. and worked every hour in between. There was a fixed correlation with how hard you worked and how much money you made. And it was very physical.

My work was so different. We worked from anywhere in front of our laptops and connected to people all over the world. There was no physical product to hold or ship, but people, smart people, just invested crazy amounts of money into it. Perhaps the only thing that made sense about it was that it didn’t make a whole lot of sense.

After we closed the seed round, we publicly celebrated with a press release, which Christoph sent to his network in Silicon Valley and San Francisco. He pitched it to various tech blogs, most notably GigaOM and TechCrunch. GigaOM got back to us pretty quickly and asked for an exclusive. We were thrilled. Om Malik did the interview himself. Then, right before it ran, TechCrunch reached out.

“We want to run this story. Give us the details.”

Christoph wrote back, “You didn’t respond, so we gave the story to Om Malik.”

That kick-started an exchange with Michael Arrington that had me shaking in my sneakers.

I tried to step in and smooth things over between Christoph and Arrington, emailing some funny remarks. They were no better received.

“Take me off your email list,” Arrington responded. “This is not a joke. Don’t ever call me again.”

I was profoundly worried. TechCrunch was the mother ship of everything startup—I needed for us to be anointed by it, not annihilated! I was not well prepared for this game. Sitting in Alex’s kitchen, I had to admit that I had no idea what I was doing.

“Oh my god, Michael Arrington just blackballed us from Silicon Valley,” I announced.

The only consolation was that later, Om Malik did publish a nice post. “It’s not sexy, like some social networks, but it is useful and fully featured,” he wrote of us. “Zendesk would fall into our ‘small really is beautiful’ category of startups.”

It wasn’t a total disaster.

Mikkel Svane is founder, chairman, and CEO of Zendesk, Inc. (ZEN), a global software company with a beautifully simple web-based customer service desk, loved by tens of thousands of organizations in 150 countries including Uber, Adobe, and Pinterest. He lives in San Francisco with his wife and children.

Carlye Adler is an award-winning journalist and coauthor of several bestselling books. Her books have been translated into a dozen languages. She lives in New York.

Qualifying startups can get one year free of Zendesk and start building closer relationships with their customers.